The concert is part of an exchange between SEAMS and The Acousmatic Project in Vienna. The exchange also includes a concert in Lövstabruk. 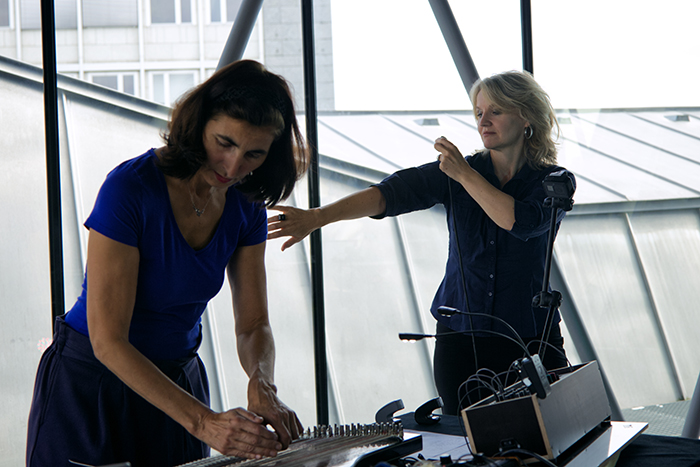 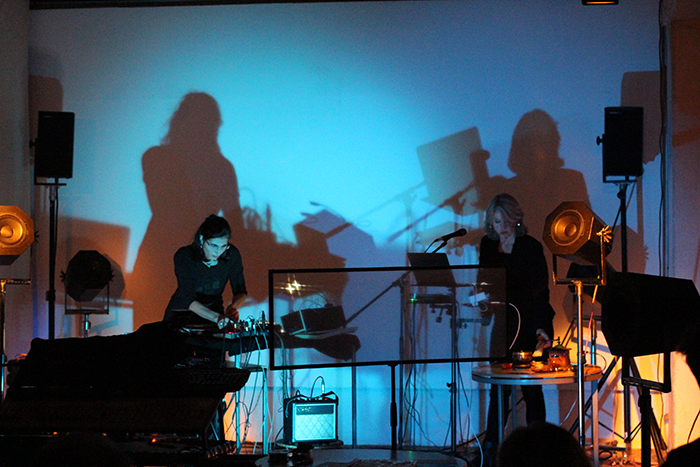 Magnetismen – Caroline Profanter
Electromagnetic waves surround us. They are omni-present, but we don’t hear them, usually. For this work I recorded those crackling, noisy, but also melodic sounds with the help of special microphones, and created a noisy little symphony out of it.

natura morta – Katharina Klement and Doris Schmid
The tradition of the genre “natura mort”, a representation or arrangement of motionless objects, goes back to antiquitiy. The objects are representative of philosophical interpretations of the visible world with reference to its transience.

This work brings together the media of image and sound within this concept. It is based on the exploration of a selected space under specific conditions. Space is understood here as a multi-layered link between a geographical location and a defined mental state.

The optical starting point is a photograph of a landscape. Gradually, parts of this landscape begin to move. On the lake, waves glisten in slow motion, while the leaves of the trees move in time lapse in the wind. The movements of the individual parts of the picture take place in independent rhythms. The perception of a uniformly running time is suspended, several „local times“ model the image.

In music, we work with a limited contingent of sounds. Through transformations, their relations are constantly shifted. Size ratios, also foreground and background change, speeds are accelerated or slowed to a standstill.

The human being remains visually and acoustically omitted. The absence of people is not only a characteristic of every still life, it also refers to the situation of our current “lockdowns“ due to a pandemic. We become witnesses to a metamorphosis that oscillates between „real“ and „fake“.

Verwoben – Martina Claussen
The piece `Interwoven ́ deals with interaction, being near and distant, with fusion, as well as peeling out of the crowd.

Flushrust – Thomas Gorbach
Flashrust was created in 2019 under the pressure of the summer heat when the hot dust often made the objects barely recognizable. Perseverance was the motto during seemingly endless repetitions of hot hours. Fascinated and deterred, I searched for a sound phenomenon of a vibrating continuum in transition to rotation and finally to white noise.

Time Crystals – Tobias Leibetseder
Time Crystals are quantum systems whose symmetrical order is defined in time rather than in space. The physicist Frank Wilczek created this theory 2012 which was experimentally confirmed 2017. A new kind of matter may have been found.

”Time Crystals” is a metaphor for a kind of new matter based on symmetric repetitive sonic structures in time thereby creating a broad variety of sonic crystals glowing in the dawn of space time.

Caroline Profanter
Caroline Profanter works in the fields of electroacoustic and acousmatic music as a composer and performer. She creates imaginary soundscapes and sonic narratives on the perceptional threshold of familiarity; playing recorded sounds taken from the context of everyday life, interweaved with electronically generated sound material. With a special interest in background noises and interferences, that are produced by our environment: electricity, and other waves, that surround us. Her performances often involve the use of amplified objects, feedback systems and are conceived for multichannel speaker configurations.

She studied Computer Music and Electronic Media at the University of Music and Performing Arts in Vienna and holds a Master’s degree in Acousmatic Composition from the Royal Conservatory of Mons in Belgium. Her works have been presented in various Festivals, including: Espace du Son (BE), Wien Modern (AT), Sound Spaces (SWE), Plage Sonore Le Havre (FR), XI Bimesp – Sao Paolo (BR), Visiones Sonoras – Morelia (MEX), Festival für Zeitgenössische Musik (I), Transart Festival (I), SYNC.2013 (RU).

Since 2017, she works for Q-O2 workspace for experimental music and sound art in
Brussels.

Katharina Klement
born 1963 in Austria, active as composer-performer in the field of composed and improvised, electronic and instrumental music. Numerous cross-connecting projects within the fields of music-text-video. She is particularly interested in the piano and its extended playing techniques. Founder and member of several ensembles for improvised music.

Thomas Gorbach
… grew up in a little village in the mountains with the shimmering sounds from his brother’s accordion, the natural sounds of the surroundings, the four bells of the local Catholic church and the changeable sounds of a synthesizer. Classical music studies in Switzerland and studies of electroacoustic music at the University of Music and Performing Arts in Vienna. In 2007 he founded the first concert series for acousmatic music in Austria and established the first Austrian acousmonium with the concert association THE ACOUSMATIC PROJECT. Various teaching activities, sound installations, PEEK research project, international concert activities and state scholarship for composition 2020.

Freelance Video Cutter for Documentaries (arte, 3sat, srf). Residencies in Vienna, Berlin, Paris, Tokio and Nairs. 2002 ― 2012 in Vienna, lives since then in Berlin.

Martina Claussen
The composer and vocal artist Martina Claussen explores and combines the sounds of the human voice and sound objects with field recordings, analogue and digital electronics. She explores the space and the performative action and has over the years steadily developed her own, distinctive style of music.

She studied computer music and electronic media at the University of Music and Performing Arts in Vienna, Voice at the Music and Arts University of the City of Vienna and composition at the Bruckner University in Linz.

She recently received the Publicity Award of SKE / Austro Mechana 2020.
She works at the University of Music and Performing Arts Vienna where, since 2009, she holds the position of Associate Professor of Voice.

Conny Zenk is a media artist working at the intersection of performance, video, and sound in the context of urban architecture and the city. Her working method is transdisciplinary and artistically explorative using digital and analog interfaces, vehicles, and media. Since 2017 she curates the participatory event series RAD Performance.